Posted on February 13, 2015 by northoneartist

When I was a child in the 50’s I had a doll’s house inhabited by my made up family – the Pobblejoys. I think I might have been a bit influenced here by Edward Lear and ‘The Pobble who had no toes’ – anyway that’s what I called the family that lived in the house. It was a cupboard – my Dad put in some room divisions for me – it had 3 stories, but no staircase – that didn’t matter. The bottom story was of course the kitchen etc, next was the drawing room and above that the bedroom and nursery. They were quite a posh family with cook, maid, nanny, governess etc – largely due to the available little dolls which I bought with pocket money from Hamleys in Regent Street.

I’ve always been fascinated by small houses and their furniture and inhabitants – anyone read The Borrowers? They are real as far as I’m concerned.

The Pobblejoys were lost for several decades – but not forgotten – and now have been rediscovered by my sister in Yorkshire. Here they are – amazing! 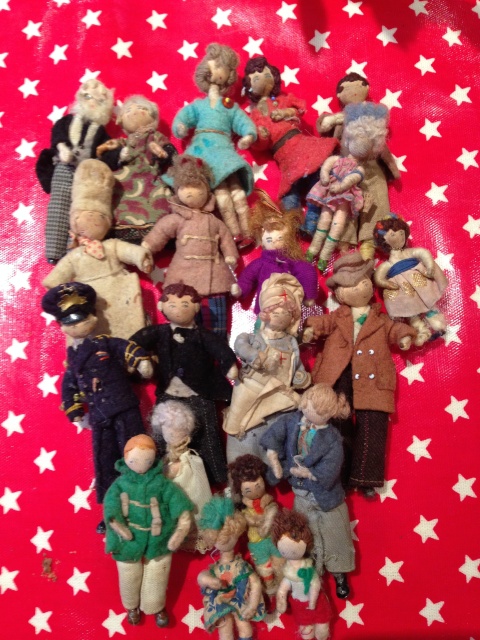 I live in London, I can see the top of the Shard from my window. I like making things and I mainly produce paintings which I exhibit and sell if the right person comes along!
View all posts by northoneartist →
This entry was posted in Uncategorized. Bookmark the permalink.